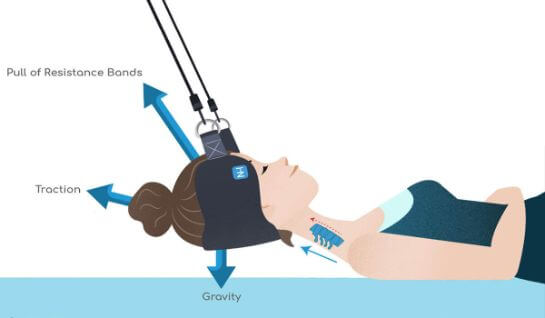 Finally, experience neck pain relief anywhere and at any time IN ONLY 10 MINUTES...or lose an eye (almost) in less than 3 minutes - this is a tale of 2 similar but very different traction devices.

My dad used to tell me there was no substitute for quality. He’d say in his gruff voice, “When you pay less for a cheaper product just to save a few bucks, you’ll eventually end up paying more - guaranteed! And that’s common sense you can put in the bank.”

That’s why it pains me to tell you this story - because if my dad heard it he’d say, “Overdrawn on your common-sense, huh?”

You see, against my better judgment (and my dad’s voice in my head), I bought a cheaper version of the Neck Hammock. For the purposes of this story, we’ll call it the “Head Knocker” - for reasons you’ll learn in a minute.

Once I got the “Head Knocker” in the mail and opened it, I could tell right away it was flimsy. The material wasn’t very sturdy, the stitching was questionable, and it just didn’t look as comfortable as I thought it should be.

Nevertheless, I was anxious to start relieving some neck pain, so I set it up. And while setting it up was fairly easy, it was all downhill after that.

I didn’t so much relax my head into it as much as I wedged my head into it. The “Head Knocker” was unbelievably tight and uncomfortable. It squeezed the heck out of my ears and the worst part, it used a chin strap to create traction on my neck but it put a lot of pressure on my jaw.

It was so uncomfortable in fact that I couldn’t fully relax. My whole body remained tense and rigid - which was the exact opposite of what should’ve been happening.

Here’s the fun part (sense the sarcasm)...after about 3 minutes I went to adjust my head and the strap holding my head up snapped, my head knocked against the floor and the plastic clip on the end of the strap smacked me right above the eye. Fortunately it didn’t hit me directly in the eye, otherwise, this would be a whole different situation.

The moral of the story is, I thought I was being clever by buying the less expensive device to save a few bucks. But without fail, as my dad would say, the cheaper version ended up costing me more money (and almost an eye) in the long run.

So what did I do? I did what I should have done in the first place. I spent a few extra bucks and got myself a Neck Hammock. And all I can say is, it was money well spent!

When In Doubt, Trust The Pros! 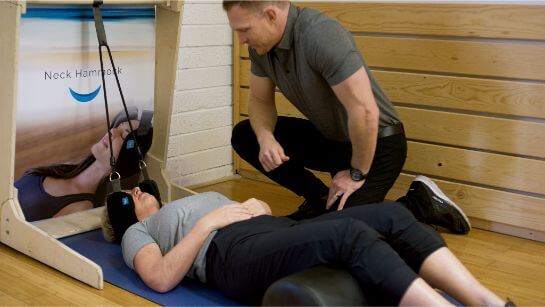 If I had given it some real thought before I bought the “Head Knocker”, I would’ve realized that there’s a good reason Neck Hammock cost a few more dollars then all the cheap knockoffs. And I would’ve made the smart decision the first time.

First: It Was Created By An Experienced Licensed Physical Therapist

Dealing with chronic neck pain himself because of an old football injury he suffered in high school, Dr. Steve Sudell, a licensed Physical Therapist with 10+ years of experience, wanted a way to help relieve his neck pain between doctor visits and chiropractor appointments.

Having tried various traction devices himself, he found that ‘door’ devices were flimsy, inconvenient to use, not comfortable and didn’t allow for total relaxation which made them virtually ineffective.

And he found that ‘floor’ devices, while somewhat effective, were big & bulky making them difficult to travel with and they were extremely cost-prohibitive as he found the cheapest one cost well over $100!

With no good choices, he decided to create what is known as The Neck Hammock. His 4 CRITERIA when creating Neck Hammock were, it must be:

And professionals agree that The Neck Hammock is the smart choice for them and their patients... 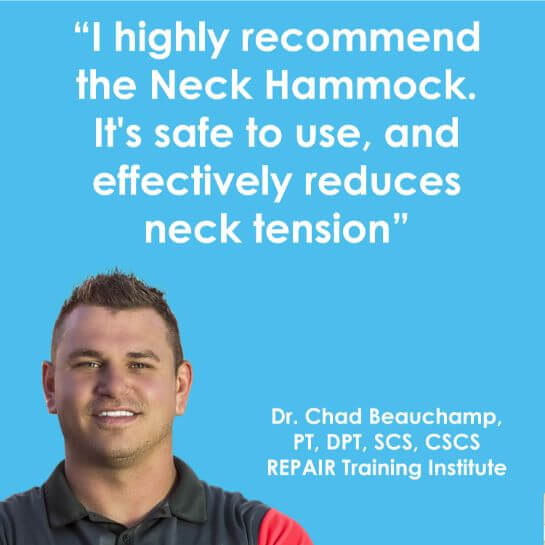 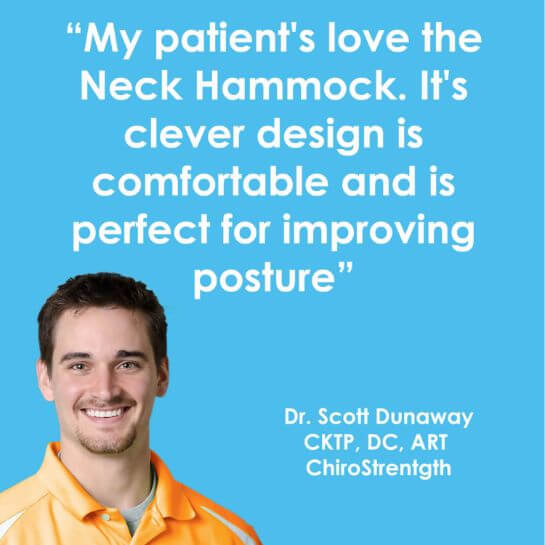 If you’ve seen the other traction devices available, you’ll appreciate the design and simplicity of Neck Hammock - which is why it has 5 U.S. Patents. Not only does it meet all 4 of Dr. Sudell’s criteria but its versatility is second to none! For example, Neck Hammock is also…

Customizable - Unlike other devices that make you get out of it to adjust tension, which means you’re constantly going back and forth, adjusting Neck Hammock is super easy. All you have to do is scoot away from the door to increase traction or scoot closer to decrease traction - that’s it!

ONE OF A KIND - The clever design of Neck Hammock lets you perform range of motion and strengthening exercises while using it. NONE of the competitors let you do that - again justifying why it costs a little more than the cheap knockoffs out there.

Third: This Video Says it ALL

Neck Hammock is FDA approved and created with quality material. It’s durable and comfortable and it even comes with a nice eye mask to help you relax while you’re in traction. And it comes with a 30-Day Money-Back Guarantee! 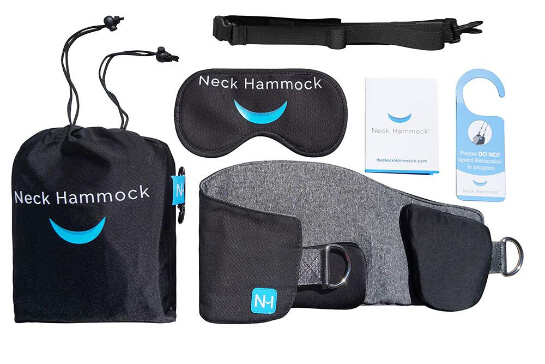 Don’t do what I did and go for a cheaper alternative...because in the long run it just ended up costing me more. My “Head Knocker” broke and if it hadn’t, I’m not sure how often I would’ve ended up using it since it was so uncomfortable to use.

Do you and your neck a favor and spend the few extra bucks it costs to make sure you get the best neck traction device available outside of a Physical Therapist’s or Chiropractor’s office.

The first time you use Neck Hammock and feel your neck pain and tension melt away, you’ll agree with me that it’s absolutely worth every penny!

This website is a market place. As such you should know that the owner has a monetary connection to the product and services advertised on the site. The owner receives payment whenever a qualified purchase is referred but that is the extent of it. The owner receives no further compensation of any kind. All of the information regarding the goods and services mentioned on this website is provided by the owner. The owner does not recommend or endorse any other product or service advertised on this website.